Being a volunteer: stories about the moments in-between

It was hard for me to begin writing, not because I don’t know what to say, but because words would sound too trivial, compared to the experience, the feeling, the moment shared and lived with others during Friendship Games. In the lack of expressing myself and typing in notes on the phone, oh, look! it‘s midnight, with many misspellings, at the moment when you would like the light on the screen to dim, something still drags you into typing another word and ignoring another a typo. It’s the magic of Friendship Games that holds you months after … magic in perfect imperfection, those unread lines in between.

Friendship Games are all that…

getting up early cheerful although you like sleeping longer; having breakfast with other fellow volunteers ready to do the work though you like having it in silence; standing outside in the cold not feeling the need to put on a jacket, because this is where fun people are and you don‘t want to miss being part of that, lemon which is too bitter but you had to taste it as it was part of the challenge while playing with children, letting yourself play and accepting the rules of the game … It’s really hard to put words down on paper, because some moments exceed the given borders. 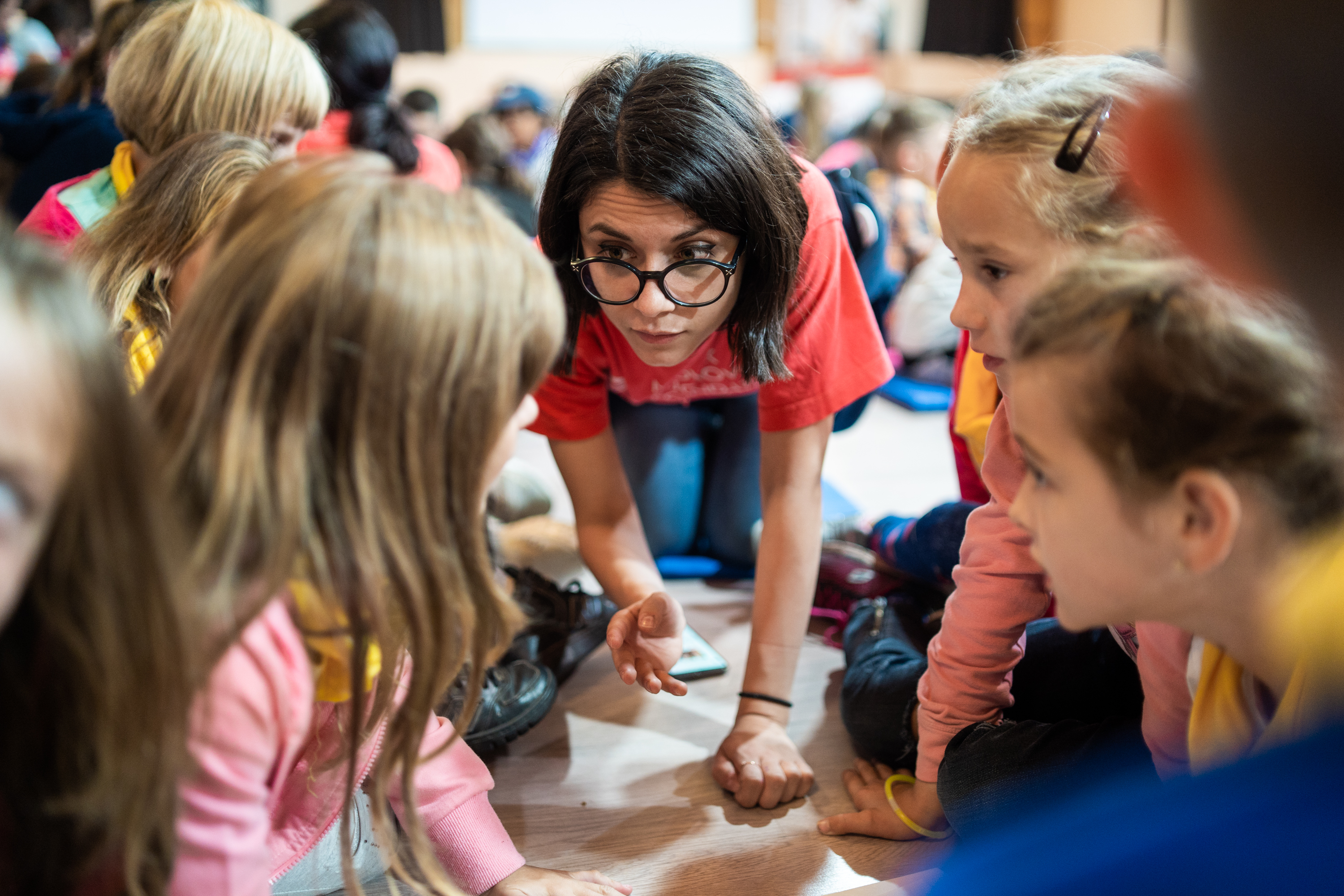 Being a volunteer at Friendship Games means listening to children.

The only way to tell at least one part of the story, and go back to these moments, are photos which are now a permanent record of this meeting. Each photo has its own two or three pages to tell, two, three or seven emotions behind it, lots of questions and learning together. The following short stories will tell you why it is important to be a volunteer at Friendship Games.

Being in the Gerousia

Although I have cooperated with the Foundation for the second year, I have a feeling that I have been with them from the very beginning, so here I managed to become a member of the Gerousia – the Council of Elders, which had an aim of sharing the experience of what to expect at Drugarijada with new volunteers.  Being part of Gerousia is primarily about networking experiences and having the opportunity to listen to others, because there is no pattern-based approach to work, which is why the challenge is much greater for all of us. This is how we find opportunities to learn from and learn from one another (from other fellow volunteers, children, teachers…) because Being in the Gerousia is always a matter of making sense of how what and who you learn with everything at Friendship Games. 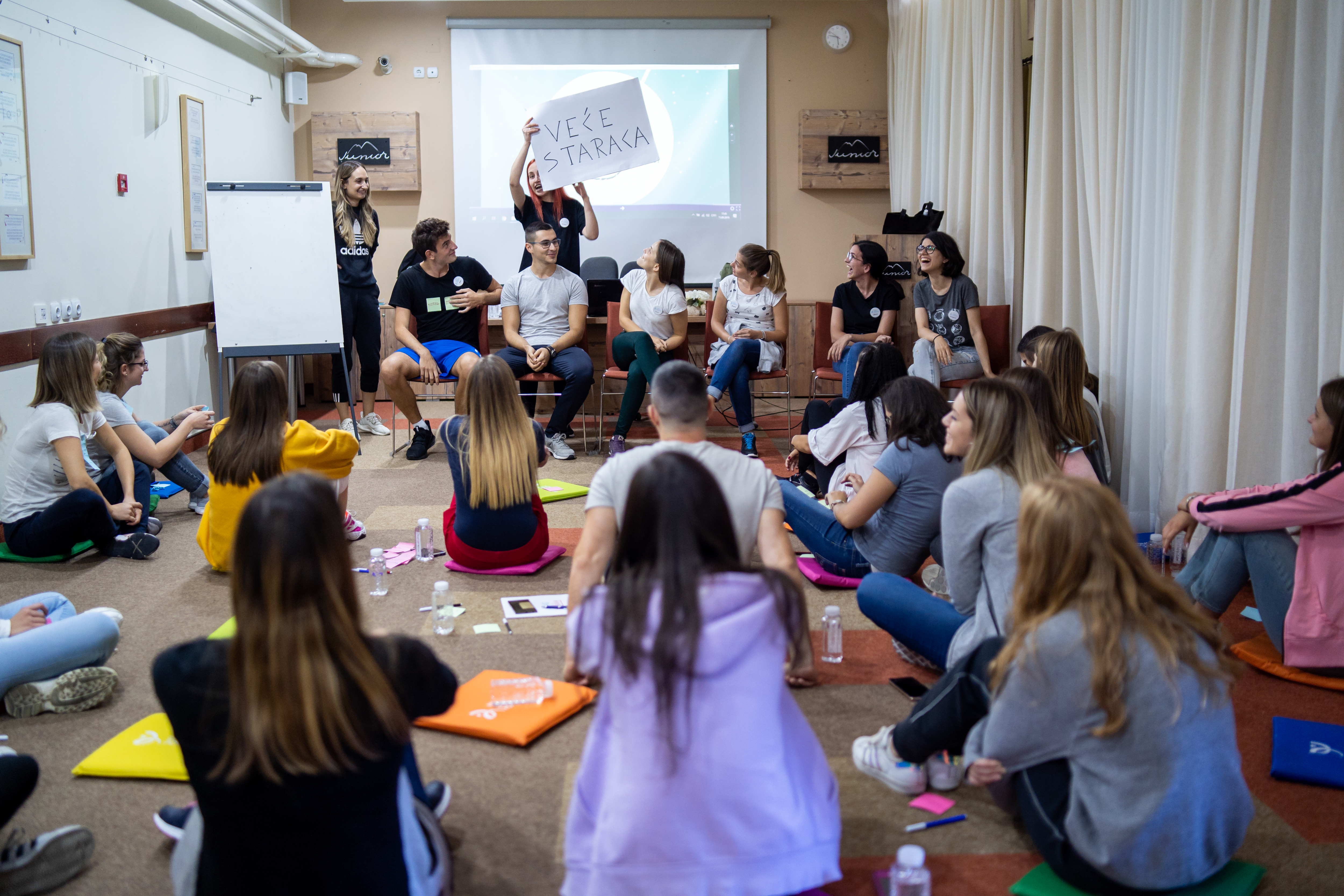 When you get your color and wear a badge, the responsibility is even greater because you are now part of the team. Your job is to spend quality time with the children. The quality parameter is what is immeasurable, what cannot be crossed as fulfilled, but what remains in our retellings when we return to our homes. When we talk about friends we’ve met, feel empowered because we first did something and mastered it, when we were left wondering about something and continued to search for an answer and when we split the last chocolate bar on our way to the blurry summit of Kopaonik.

There are also moments of what was written, crossed off, scrabbled, then copied … all those occasions where we were learning and where our proposals were able to be realized. Team trust lies behind these photos, with all our exchanges of ideas, agreements, and disagreements, negotiations, everything that cannot be put on the scale of assessing what a team is, but you just feel that you are part of it. 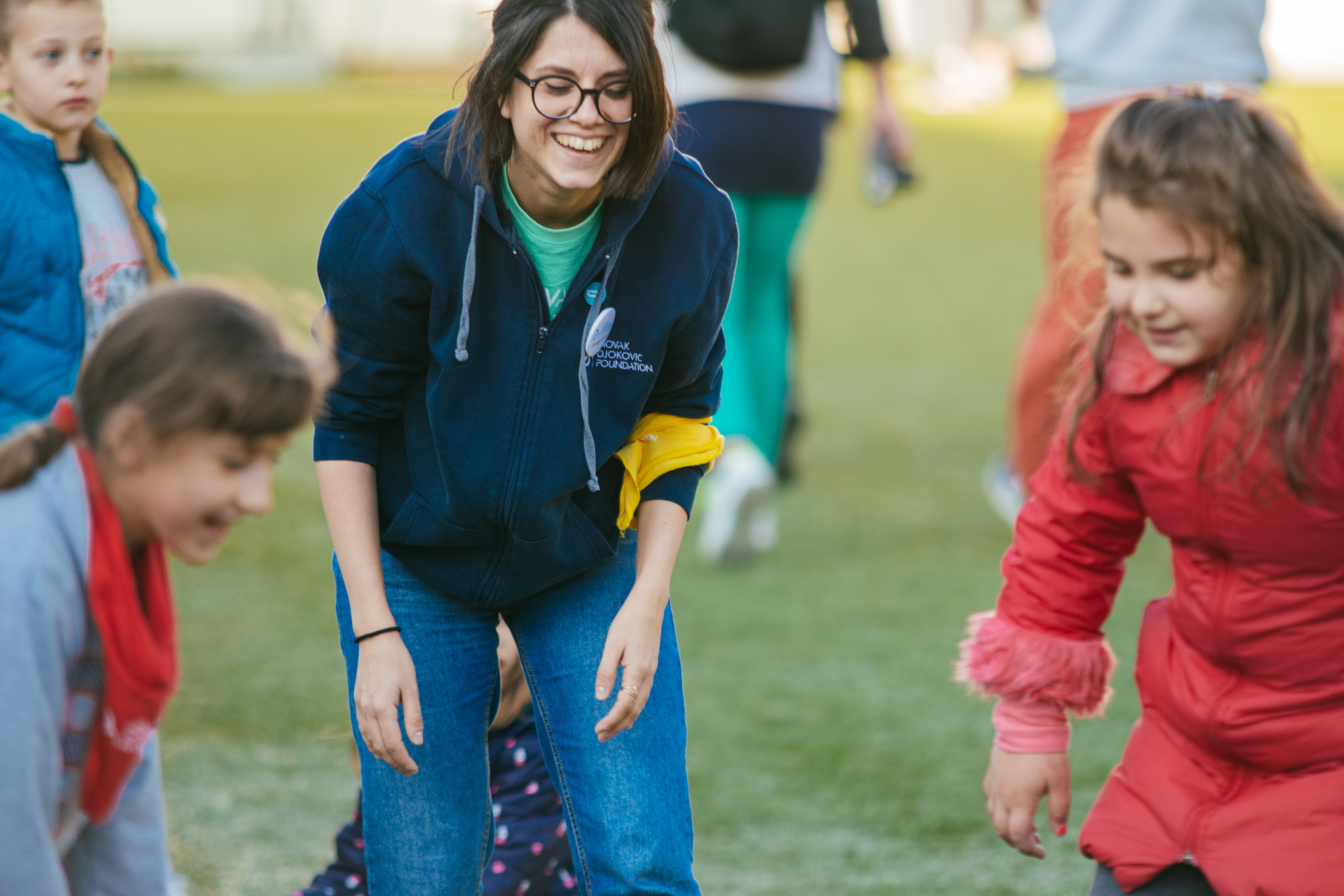 Being a volunteer at Drugarijada means that your job is to spend quality time with the children.

Being an educator – hearing children

Friendship Games are not just my story, it is the story of other volunteers, children, teachers, photographers, coordinators… It is a network that we knit together and in which we share stories, some of which overlap, some make a new thread and some have yet to be told.

This photo seems like we’re having something up our sleeve, and we’re actually trying to answer the question in a quiz aaaand … we give the wrong answer.

But who cares, the point is not whether we knew the right answer for what kind of plants there are, or which planet is the coldest of all in the solar system, but the thing is, we wanted and we could express our thoughts, that we felt safe in this environment to make our assumptions, to try, to feel, to taste, to smile once, twice, to be there for others when they are not having their best day. It is learning that brings us together and glorifies what we are, this is what Friendship Games bring us. And this is exactly what our children tell us only if we listen to them carefully:

love, when we get on well;

when we are all together.

I would add that it was also the first successful kite flying, even if the strings tangle with another child’s kite; the tenth-attempt-successful swing in the pool – with and without floats; kicking the ball with a collision during an encounter; sitting and laughing on the grass. The message children send us is that we have to tackle the challenge, it is not enough to encourage them from the sidelines without being ready to do it ourselves: Come on, try climbing, it’s not frightening, you can do it! and the answer is: If you try it, so will I! 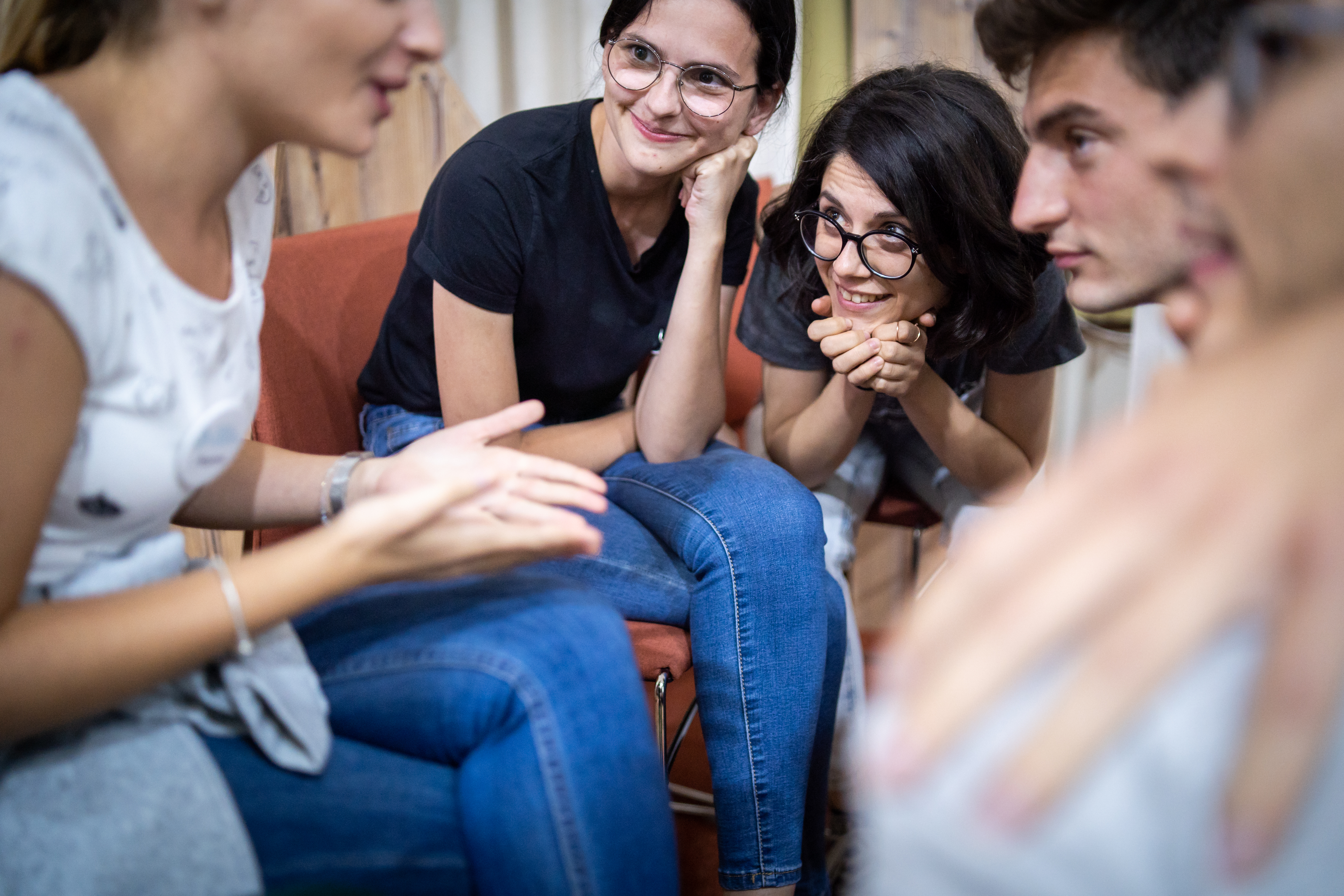 Drugarijada is not just my story, it is the story of other volunteers, children, teachers, photographers, coordinators…

All of this means BEING A VOLUNTEER, but also…

There is no recipe for what it means to be a good volunteer, it builds up in contact with others and respect for each person’s authenticity in their expression. There are just those interim moments that keep shouting: so this is what BEING A VOLUNTEER at Friendship Games is like. 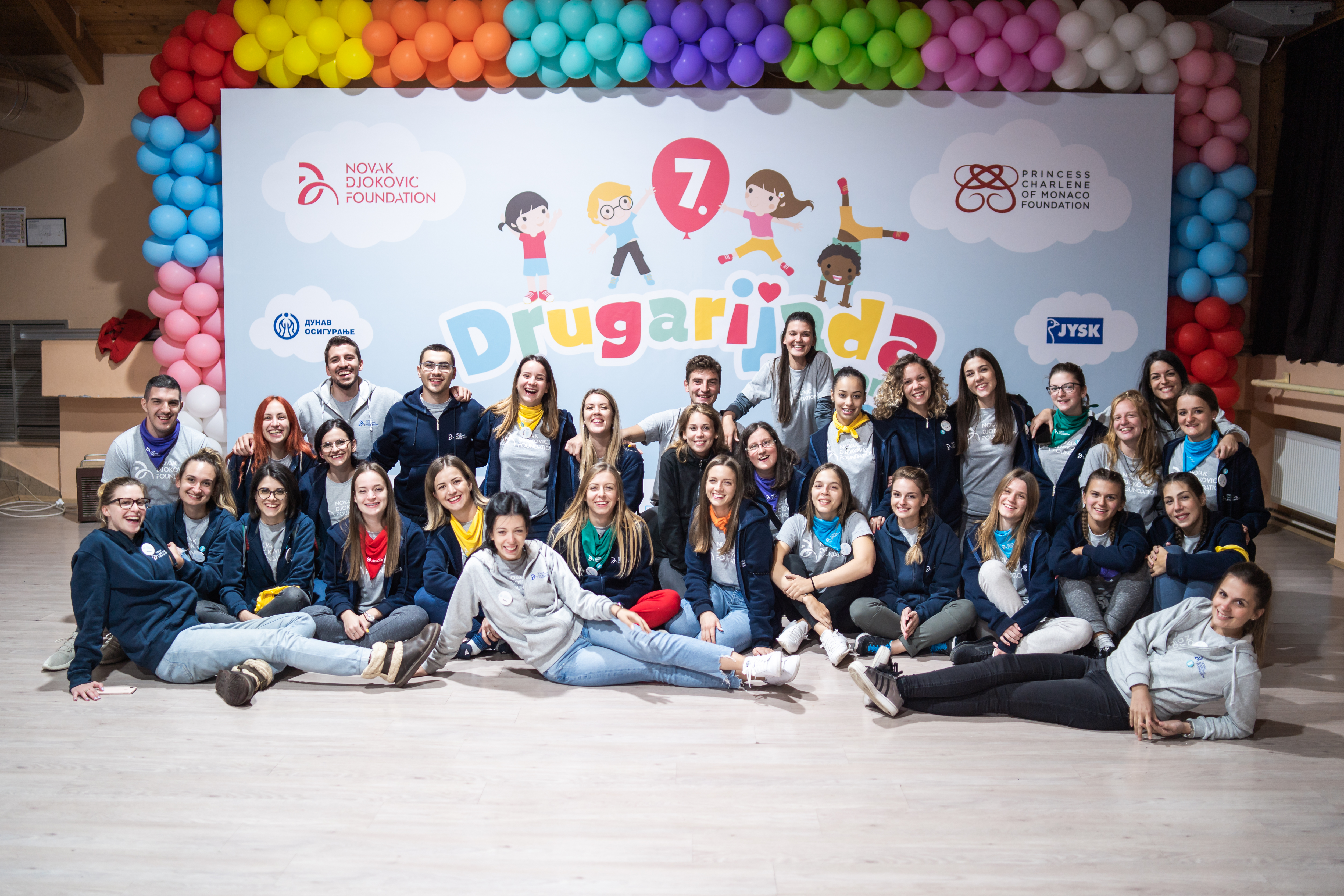 A Letter from Our Volunteer from Italy

Volunteering as a life-changing experience