The panel will present a new edition of the Handbook for Parents of Young Athletes. Read the rest of the text for some words of wisdom from Novak Djokovic, Zeljko Obradovic, and Sonja Vasic.

The panel will include two keynote speakers and experts in this field – Prof. Dr. Ljubica Bacanac, author of the Handbook, and Prof. Dr. Miljan Grbovic. The moderator of the event will be the author of the “Path of a Champion” program, Ana Jovanovic. The panel discussion will be held on April 6 at 5.30 pm at the Novak Tennis Center, and will also be broadcast live via the Novak Djokovic Foundation’s YouTube channel. The official partners of the program are the Lacoste Foundation and the Uefa Foundation for Children.

The Novak Djokovic Foundation traditionally celebrates the International Day of Sport for Development and Peace with children – from playing football, to hanging out with the world champion Ivana Vuleta, to last year’s presentation of the “Path of a Champion” program.

As we anticipate April 6, let us recall the previous panel entitled “The role and establishment of authority in the development of character and discipline”, which was attended by Novak Djokovic, Zeljko Obradovic and Sonja Vasic in December.

Zeljko Obradovic on whether 1) a child should choose the sport and how much it depends on the parent; 2) it is possible to make up for the mistakes parents made in raising and disciplining children:

Every time I start working with a new team, if I have young players, I always ask for their psychological profiles. It’s something we’ve done this year in Partizan before the preseason. The psychological profile is something that absolutely explains each of them individually. This is done very professionally, all character traits noted, and I had the chance to witness this every night during the preseason.

Everything the doctor wrote on the paper, I saw on the court. Carbon copy.

The role of parents is very important and parents must do everything in their power to get the children to play sports—any sport—but never make them choose, never say – you must do this sport. I’ll go back to the time when I was young, watching sports with friends. After the football World Cup, we all played football. Then there was table tennis, so we all played table tennis. Tennis wasn’t as popular here back then because we didn’t have these great role models [like Novak] we have now and we chose basketball. That’s how you decide in the end. It should be a child’s choice, not imposed, but, as Sonja said, it is incomparably better for the child to do any kind of sport than to sit in a room with devices that are accessible to them right now. 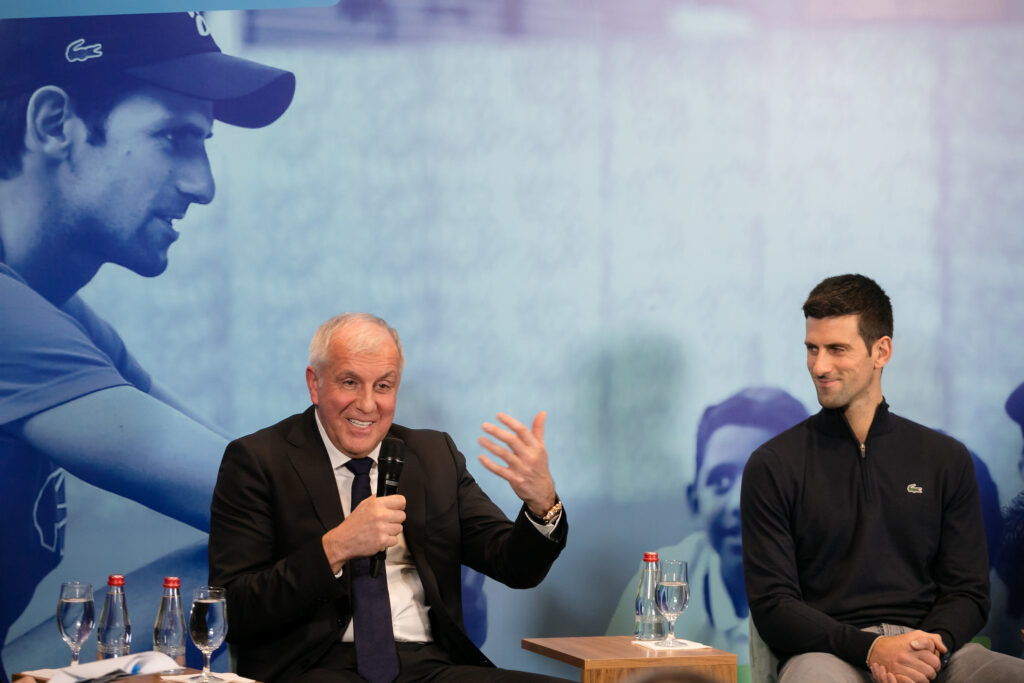 Masters of their own craft: Zeljko Obradovic and Novak Djokovic.

Novak Djokovic on 1) limits of mental strength; 2) feeling pressure vs. building up the confidence; 3) whether this skill can be learned/perfected, or are we born with it?; 4) devotion of young athletes nowadays; 5) multidisciplinary approach:

We’re all different and that’s a fact. Sonja mentioned the environment, I think that it is very important. My personal mental strength, of course, I generally don’t like to talk about it myself, but I do have the ability to overcome certain moments, though not always. Overall, I was lucky to tip the scales in some moments in professional tennis over the last 15 years and that has given me a reputation. I couldn’t choose one thing and say – that’s the secret. Or that there’s a magic potion, a certain exercise, chess, or whatever it is. It’s a combination of factors that influence the development and the whole mental construct of a young person.

I was lucky, of course, with the genes, first and foremost, but I think that’s something people overuse these days. “He has a genetic predisposition, he’s born to be a champion.” I’m not saying there isn’t a certain percentage of that but I think it’s too often used as an excuse by someone who can’t accomplish certain things and says “he’s born that way” or “he has this muscle more developed” or simply has a better mental ability and I need to reconcile with the fact that I can’t do it. To me, this is just an excuse.

And that’s how it goes. It really is that simple. If we’re talking about professional sports, I had a clear vision, when I was 7 years old, that I want to be world number one, but I was extremely lucky to be surrounded by certain people, a few of them, starting with my parents. My father especially had this tremendous driving force and faith in me, but as he often said in public this didn’t come naturally to him, he never played tennis, he played other sports, but if you ask me – he, along with my mother, did something very smart and wise, he went to people who were true experts, available to him at that moment, and asked for their opinion.

The father and the mother and the young athlete must gather around and decide what it is that they want. Once that’s established, we’ll see what resources we have to make it happen.

Luck is a factor in life, of course, but a man often has the chance and the tools to summon luck. You can achieve whatever you want. It’s only a question of how much you want it, how dedicated you are to your dreams… because everyone has some dreams.

I’m not getting into how much this depends on a generation, but there’s so much less dedication and devotion now than there was in our time. We’re talking about young athletes. Something I also realized is that there’s a lack of mental clarity, a vision of what you want in life. We’re not only talking about the young, 14 or 15-year-old tennis players but also about 18 and 19-year-olds. They’re even more lost, so to say. That’s a prerequisite for everything, you need to know what you want to accomplish and where you’re going.

That’s even a greater challenge in an individual sport, because… On the one hand, it’s an advantage, you have no choice but to take matters into your own hands and take the responsibility, to make your own life choices and say – I must be responsible for my actions and act in a certain way to make it on my own. No replacement is coming, you either win or lose on the court. No one will save you, you are your greatest ally. On the other hand, [in team sports] your teammates can motivate you, lift you. 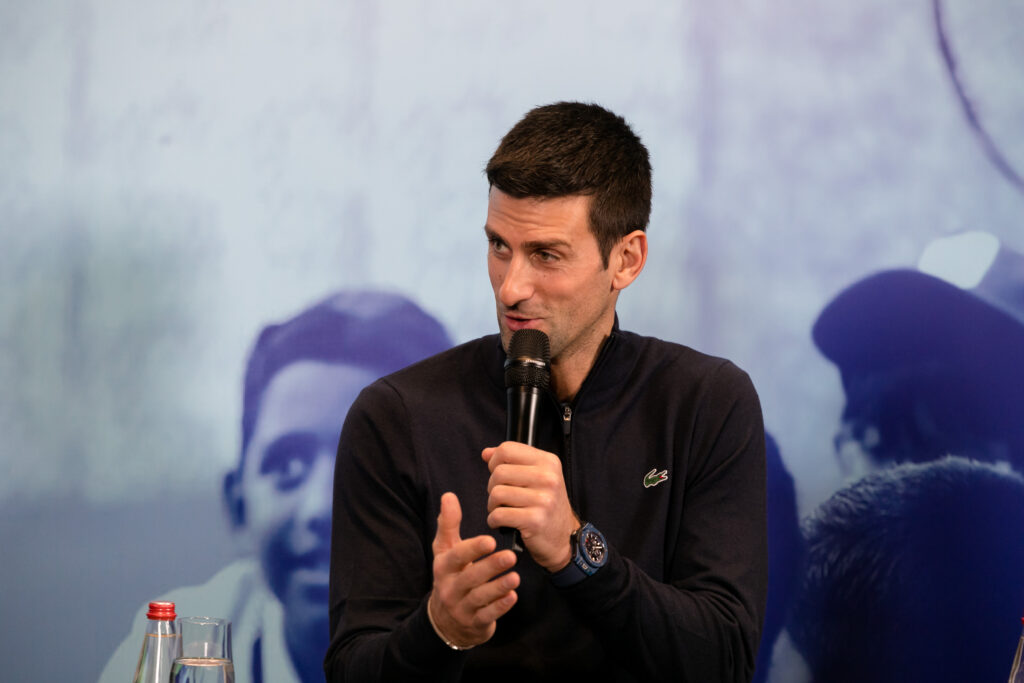 Sonja Vasic on 1) how much have the changes in sport today influenced its values and what kind of message is being sent to young athletes today; 2) Olympic Committee of Serbia involvement with parents and young athletes:

Changes have been great, I think, the approach to sport has really changed. Looking from this other role that I have in the Olympic Committee, I have a feeling people think it’s a privilege of sport that someone practices it. It’s like a child or a parent are honoring a particular sport. We used to think we were the privileged ones.

To this day, I consider myself privileged that basketball was my life, that my profession was something I one day chose to play and, in that respect, I feel that I really was privileged.

It wasn’t nice or easy all along that way, but I have lived my dream. I think that I was fortunate in that respect, while today it’s all upside down somehow. As Zeljko mentioned before, we dressed in rags and had one pair of sneakers per season. Today it’s somehow considered that it all needs to be shiny and big from the start. I think this distorts the approach to sport from an early age. Some things come too easy I think and then of course, in time you lose the passion and the desire to fight for it. Those are some serious topics, but yes, it all comes back to home and how you form your child in relation to anything, not just the sport. I hope that this is, I can’t really say temporary, but that we’ll manage to change it. This is an issue throughout the whole world because society is changing, but definitely, the view and the experience of sport are a bit distorted today, as well as the approach of the child and the family. 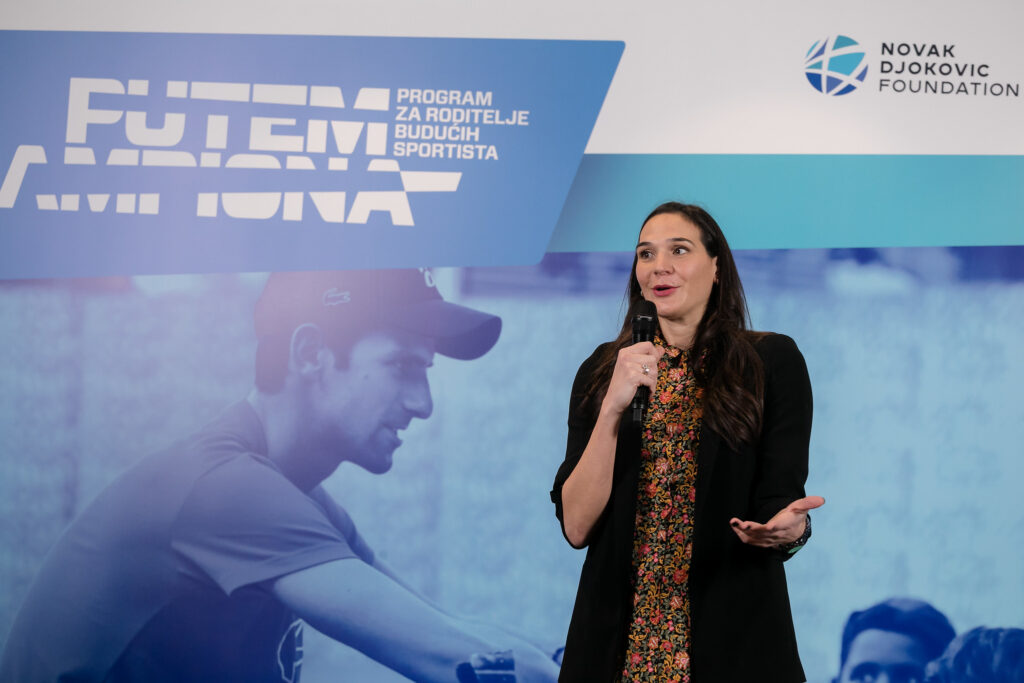 Skillful both on and off the court: Sonja Vasic.

As Zeljko said, I think these really are special emotions for the parent, especially at the Olympic games, it’s a whole different dimension. Another, much larger project that we got the IOC award for is the Olympic Family. It’s a project we carry out with young athletes, participating in the Youth Olympics where we recognize the families and give out placards to their first clubs and their schools; because this is the base they originate from and they should all be recognized. These are special moments because it’s obvious how much it means to them. It’s a small thing, but they’re really proud of it and it’s a nice gesture.