Half a Century of Play at the Pinocchio Puppet Theater

The largest puppet theater in Serbia marks half a century of its existence. At the ceremony organized on this occasion, the Novak Djokovic Foundation was presented with the Charter of Friendship and gratitude for the support and improvement of the work of the Pinocchio Puppet Theater.

The friendship between the Pinocchio Puppet Theater and the Novak Djokovic Foundation is a long-lasting one. First, in December of 2019, Pinocchio hosted an event at which we distributed New Year presents for 160 children from Velika Plana, and we subsequently helped renovate the theater with a donation in excess of EUR 68,000. On that occasion, we donated 126 chairs for the auditorium, a new stage floor, and stage curtains. The Foundation also financed a part of the adaptation of the chairs in the existing hall in the amount of EUR 5,500.

In addition to the Foundation, the awards were presented to the founder of Pinocchio, Zivomir Jokovic, then the actor Zoran Todorovic, as well as Ivan Karl and Gordana Goncic from the Culture Secretariat. The manager of the theater, Vladan Djurovic, welcomed the audience by saying that the theater has never given up on puppetry – its primary goal and idea. 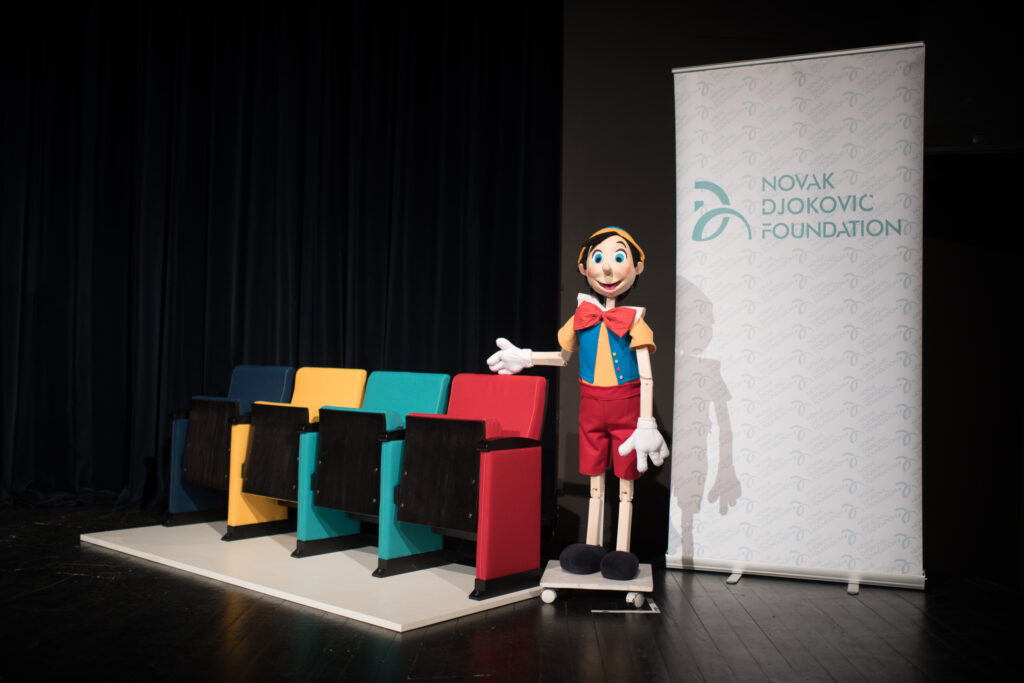 Puppets, masks, animation and children – Vladimir Djurovic said that Pinocchio has not given up on puppetry for 50 years.

On behalf of the Novak Djokovic Foundation, the Charter was received by our National Director Maja Kremic, who once again reminded us of our slogan – “Believe in their dreams” – and said that Novak Djokovic‘s example has shown that children’s dreams do come true:

“Theater is a universal tool for the education and development of every child. It was an incredible pleasure to renovate and tidy up this space together with Vladan and all the wonderful people who work here and make this theater so amazing and with such beautiful emotion. In the end, it all comes down to people, so I wish everyone who has contributed to Pinocchio throughout its long history a very happy birthday, on behalf of our founders and the entire Foundation team. We will be happy to participate in the joint projects we are already planning. We believe that the children will enjoy it, and that we, the adults, will not forget to go to the theater more often ourselves,” said Maja Kremic.

How to Build Resilience in Children