Empathy Is Nurtured Through Volunteering

“You’ll be volunteering? You are excited? I do not really get you, there is nothing in it for you” – the sentence I have heard multiple times since I announced my decision that I have finally gathered enough courage and decided to apply for volunteering at this year’s Friendship Games.

My first thought was that we are “taking the children on a trip”. And, yes, I am excited, but I am also equally as frightened. What if something goes wrong? What if the children do not react well to me? Or worse – what if someone gets hurt? What if I get too emotionally attached to those kids, which is not an unheard-of occurrence in my case? All possible and impossible fears are surfacing and are louder than the silence of my room the night before I am supposed to leave, and the music I am listening to in the morning while traveling to the meeting spot. I am travelling into the unknown, with unfamiliar people to welcome children I do not know and take them according to a familiar plan to activities largely unfamiliar to me in the sense that I have last seen a cable car fifteen years ago.

I arrive at the meeting spot and turn off the music I wasn’t even able to hear thanks to the too-loud whispers of all my fears inside my head, and then BOOM! A pleasant surprise!

While we wait for our ride, we spontaneously start to meet each other.

Truly heartfelt, communicative, patient people with a great wish to hear the other side, who wonder who you are and what your dreams are – later, well-oiled machinery of volunteers.

During one such pleasant conversation with a volunteer who has been a part of the team for a number of previous years, I get a truly useful piece of advice: “Do not worry, do not think, just give in.” And just like that, all of my fears are seated, still at their battle stations, but significantly calmer than before. Volunteers I “worked” and spent my time with are wonderful people with big hearts, open minds, people without judgment and ready to help, to accept anything new, anything different, strange, to work on its inclusion, people without a single bit of vanity – eternal children at heart. Such people had been chosen by a team of employees similar in nature, and upon arrival, I felt like I was meant to be there and I felt endlessly grateful for the opportunity. 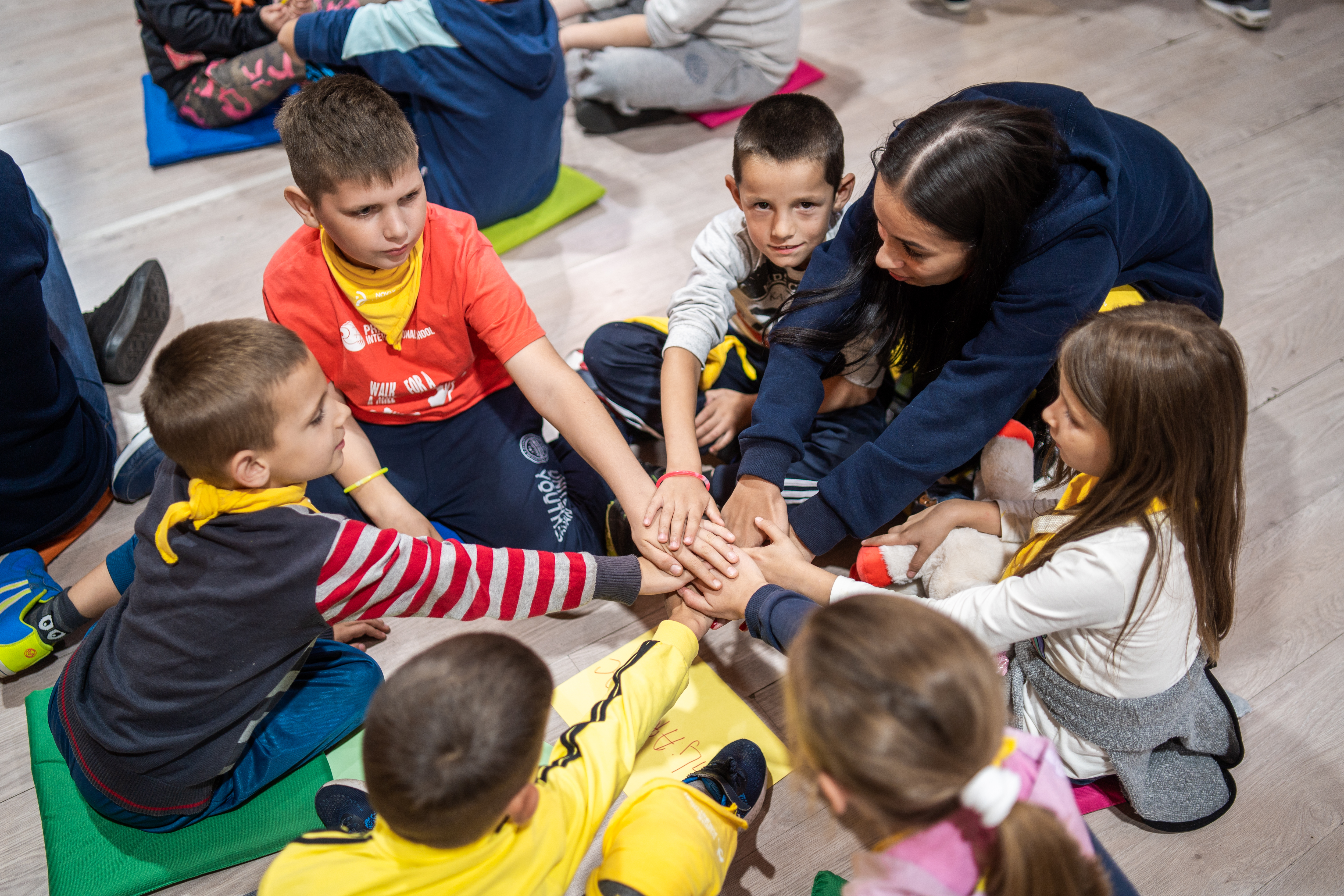 “You must not give up when you can really do something for the sake of the one who is watching you and following in your footsteps.” Our volunteer Kristina Vukomanovic and children during a quiz at the Friendship Games

The main motto my roommate and I spontaneously created were: “That is okay too!” It referred to every fear, difference, obstacle, doubt, insecurity and tear that appeared.

I have never seen so many people with so much empathy in so little space.

One of my fears starts to fidget because children are arriving – 132 children, 132 anticipations, 132 dreams which I long to hear. I want to give them the best of me, to teach them everything I know and have enough time for. Of course, as it usually happens in life, something completely different than expected happens, I become an activities coordinator for six days, and a passive student under the tutelage of my 132 mentors. Truth be told, some are constantly “with” me, others “teach” me in passing.

We revise etiquette and good manners every day, wherever we happen to meet.

They taught me what gratitude is, what laughter without a cause is, what fear is, and how to run straight at it.

I realized that fear can hamper a person, for example, like me, in Adventure park, but the children explained to me that the most important thing is to get up and try. I became afraid that I set a bad example because I gave up when I felt that I truly could not go on (despite our incredible animator’s efforts to help me through it), but completely the opposite of what I expected to happen happened – they came with me – TO TRY, and you know what? They made it! And me? I was the happiest person in the world because of their success.

One boy showed me that it is perfectly acceptable to be good ONLY at things that interest me, and to just try my hand at the rest – he was the best at science. His friend from the room next door showed me how to exactly share the remaining half of a chocolate bar even though there are two more there, lying unopened, because, as she says: “This way it tastes better!”

The balls, for which I was not sure what they were for, were actually small handmade paper and plant seed planets. I was happy that my hands were stained with paint. Somehow, I managed to smear even my forehead, which was funny to them, but they still helped me wash it off.

I was proud when a little girl wrapped my finger that I hurt on a kite thread while flying a kite (the only one of all children!) using the knowledge she gained in a Red Cross workshop. While doing that, we were talking about serious topics in order to make it easier for me, so she explained the difference between a crush and a boyfriend: “You know, the crush is when THE PERSON does not know, the boyfriend is when he knows.”

My encounter with the cable car after fifteen years did not go the most glorious way. I sat there with my three kids, we started moving, and I got scared, but at that moment I realized: “Someone is watching you!” Someone is looking at you, believes you, holds you firmly by the hand that is shaking a little, because it’s cold she says, but I know that it’s not like that. There should be no fear when children are around – you are the guardian of their fear. 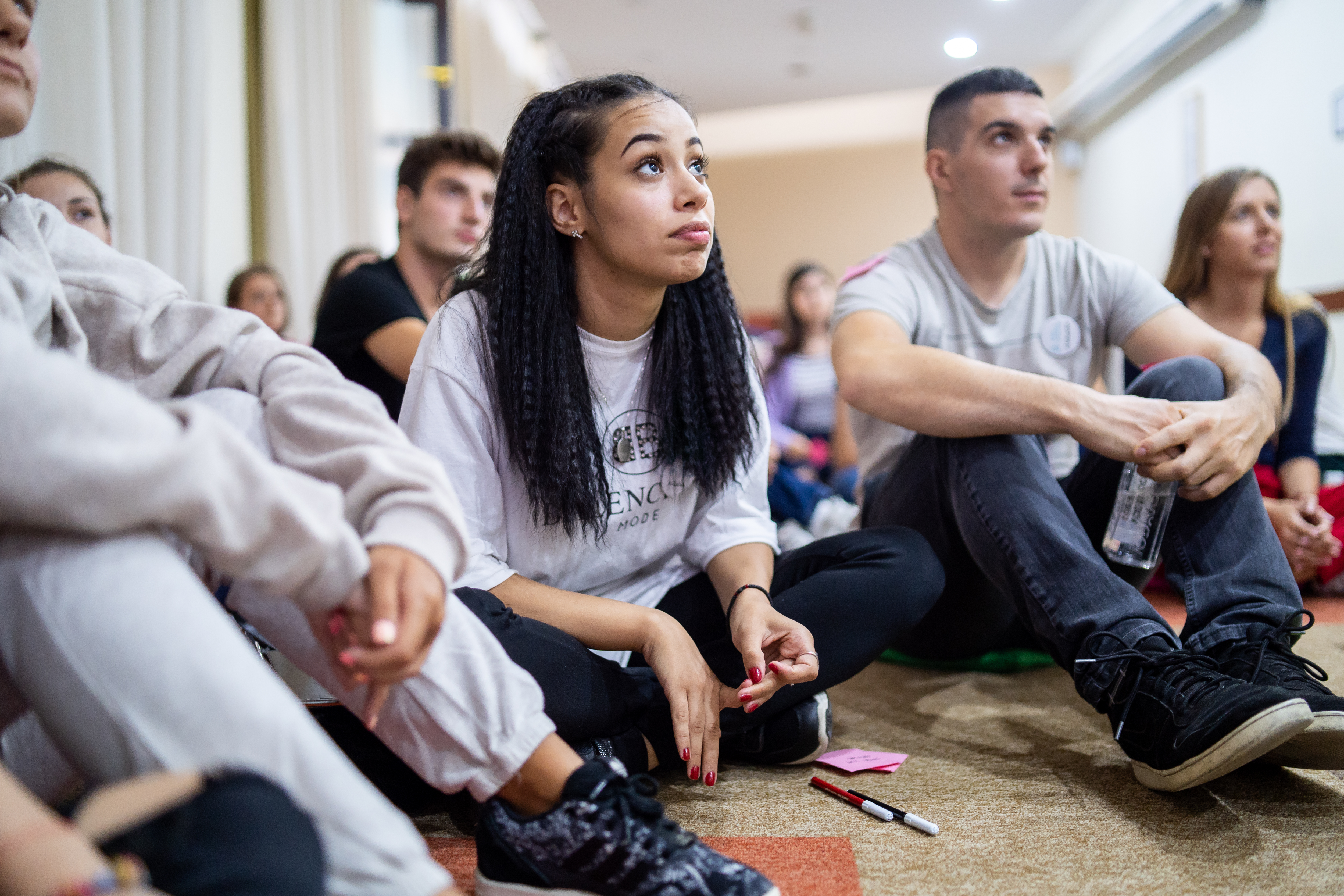 All our volunteers went through some team exercises at the Friendship Games.

You must not give up when you can really do something for the sake of the one who is watching you and following in your footsteps. Our trip on the cable car after the first three minutes was almost the best thing of the day – we sang the children’s songs on our way to the top, then we entered the cloud where the Frozen Kingdom castle was located (the fog was a bit thicker that day), I was Olaf the snowman, and the small trembling hand did not want to get off the cable car later on.

We were honored that these Friendship Games were attended by the founder of the Foundation with his family.

They are great, successful, selfless, kind people who are not standing with both feet on the ground, but literally sitting on pillows on the floor next to us.

They were role models to me, so I was very happy that the kids noticed the same thing: “Oh, Tina, well, Novak is like… like… US! Let’s squat together! That’s what real stars do!”

Our days in the Friendship Camp were very fulfilling, exciting and dynamic. Swimming, painting, sculpting, a planetarium, a science show, flying kites, an IT workshop, a Red Cross workshop, a nature day, a sports day – a lot of lessons, much effort put in, lots of laughs, lots of energy, and eventually fatigue. Neither children nor we could wait for the evening to go to bed and recharge our batteries for the next day. When children would go to bed, we volunteers would have a couple of more technical things to do afterward. At first, doing that seemed hard to me, due to fatigue, but the image of a child’s smile from that day is a motivational trigger – there is no fatigue when you know why and who you are working for.

After a long time, a long-forgotten feeling of a mixture of fatigue and great happiness overwhelmed me – I was so tired that I could hardly wait to go to bed and sleep, and so happy that I could not wait to get up and relive another such great day.

“You’ll be volunteering? You can’t wait? I don’t understand you really, you won’t get anything out of it”- as I said, I used to hear this sentence often, so I had a good answer ready upon my return. At the initial volunteer training, the Foundation scholarship recipients, our great (hearty) volunteers, Jelena and Nevena gave one brief formula S2 = see + share! I have seen something, and want to share it with everyone.

The soul is healed by time spent with the children. Empathy is nurtured through volunteering. The Friendship Games is an oasis and a health resort for basic human values and it was an honor to experience it. I was happy, smiling, playful, surrounded by honesty, unconditional love, understanding, hugs, I was helpful, I learned a lot and made friends. There is no salary that could make up for the happiness caused by the following conversation during my volunteering time:

– Tina, you are guessing! Letter F!