Have you ever been in the situation to sit with friends in a cafe, enjoy your drinks, discuss certain social issues, ending up with a conclusion that you would rather change everything completely and solve those problems? Of course you have.

Everybody do that, whether it’s politics or some minor sociological issue such as the problem of stray dogs on the streets. However, we usually end up these debates realizing that we either don’t have enough time to deal with such matters, or that no one truly cares. Somebody else must have thought of solving such problems before, but it’s impossible to do anything about it in this country, we often conclude. Things like pessimism, mocking the system and the people, come next.

I have to say, you are all wrong

Only four months ago, one of my friends and I came to the very situation I’ve mentioned above. We were strolling through the city center. We saw street beggars there, asking for some money, sitting in the cold. There were also street musicians playing some sad love songs, although it was freezing outside, and homeless people rummaging through trash cans looking for food and clothing. At the same time, we were warmly dressed, not feeling hungry, holding hot coffees in our hands. Sounds familiar? At that moment you probably think of nothing else but how lucky you are to have so little, and yet, comparing to others, so much. An explosion of feelings happens inside. First of all, there’s this feeling of guilt, for instance, because you had complained about something the day before, but nothing was really wrong with you. Then there’s compassion for the pain and sorrow of these street people who are obviously in much more trouble than you. Finally, we come to the crucial point, a certain crossroad, with two different ways. The one is to share your feelings with a friend. After a short conversation about the issue, you make up your mind to take your old clothes to the Red Cross or some drop-in-center (to get rid of guilt) and continue your life as nothing has happened. The other way is to do something that will really make a difference!

It didn’t take us long to come up with the idea.

We had a vision to partially solve the problem. How about sharing our mixed-up feelings and emotions with all the people from Serbia and the rest of the world? Why don’t we start a chain reaction of generosity and thus inspire others to do the same? We decided to make a motivational video and show how little it takes to bring a smile to someone’s face. People in Serbia are known for their compassion and interest for tough moments others are going through. However, It’s no secret that the world is circulating the wrong image of Serbia and stereotypes attached to it. There is also so much pessimism around us. Therefore, we had enormous inspiration to make a big step towards stopping the abovementioned problems. 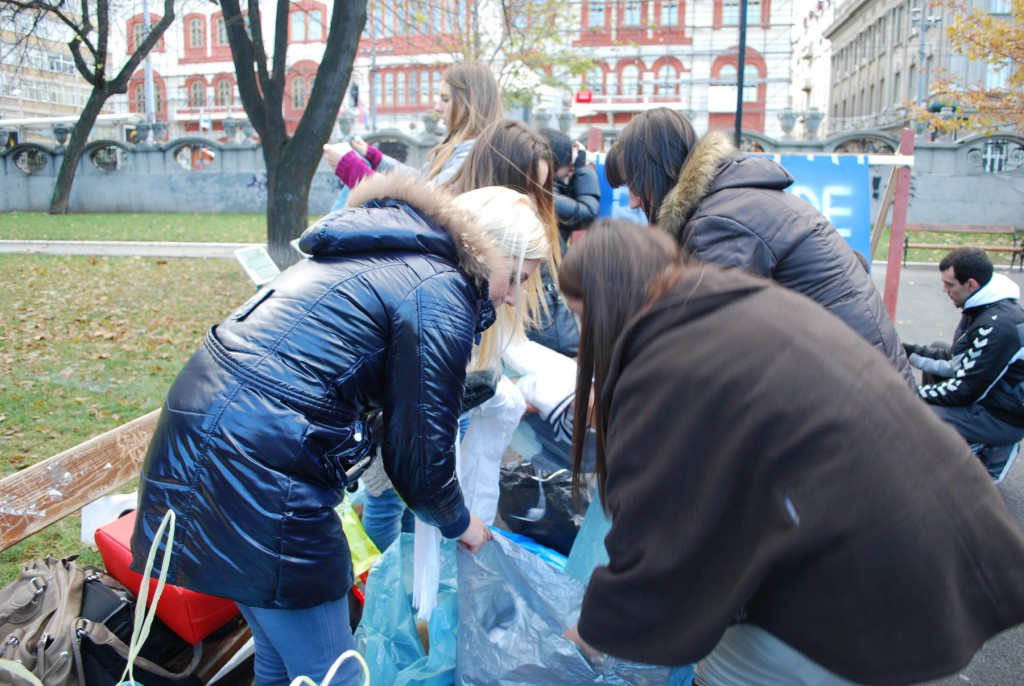 It was worth trying.

We set our idea in motion the very same day! We invited one of our friends with an excellent knowledge of video production. So, there were three of us, all students with less than a thousand Dinars (9 EUR) in each pocket. But, we had a vision how to make some changes in our society with the knowledge, time and experience we have. We filmed and edited the video in two days. Then we posted it on YouTube. Within two hours about 40,000 people saw it. The phone started to ring and our Facebook page was full of messages and comments. All web portals were writing about us and the media supported our idea.

We have bought some food to homeless people. They were so grateful. Quite a simple thing, but this meant a lot to them. In this video we also invited others to join us, do something good and thus inspire more people to act in the same way. You could hardly imagine how many people contacted us with a desire to help. There were those from Croatia, Bosnia and Herzegovina and from all parts of Serbia. People called and explained their ideas and visions to do something even bigger and better. Our hearts were full! Honestly, we have never dreamed of the fact that so many people would react in such a positive way. We were prepared to face with failure. We did not have much faith, yet it turned out that we are still the nation full of compassion for others. We have awareness and it doesn’t take us long to do something good and to move forward. We’ll not stop here! We still have the vision and idea how to solve some issues and how to make the world a better place. We still want to inspire others, to help those in need, and those who have remained in streets for reasons and circumstances unknown to us. We want to give them a second chance and send to the world a better image of people from Serbia. Luckily, now we can achieve our cause with ease. As more and more people want to join us, there are less sad faces on the streets. Smiles are everywhere.

So far we have succeeded to encourage people to do something good and be generous on everyday basis. For example, in the bakery people now buy a loaf of bread over and give it to the homeless when they are passing by. In one of our campaigns we have invited people to bring old clothes. Thirty bags of warm clothing have been collected for children from Home for Infants, Children and Youth, drop-in-center, and for the Red Cross. Furthermore, we have invited people to organize a charity gig and raise money for the treatment of nine-year-old Biljana Stojković. There were more similar campaigns and appeals to help those in need. We are not heroes of these stories!

The true heroes are all these people who gladly respond to such appeals. It doesn’t take much to react positively and do something good for others. Like we said before, we will not stop here. On March 20 we are planning to organize another campaign and collect plenty of clothes for children from shelters and drop-in-centers. We invite all of you who want to help others in any way to do so every time you have a chance! It does not have to be a homeless person. It can be your next-door neighbor or an old woman crossing the street. Or you can comfort someone who is sad by giving him/her a smile!